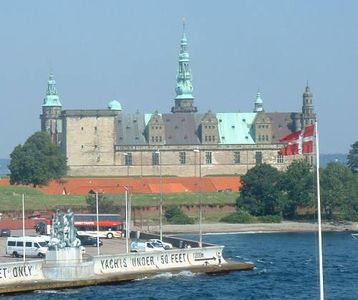 The Sound Dues were a toll on the use of the Øresund which constituted up to two thirds of Denmark's state income in the 16th and 17th centuries. The dues were introduced by King Eric of Pomerania in 1429 and remained in effect until the Copenhagen Convention of 1857 .

All foreign ships passing through the strait, whether en route to or from Denmark or not, had to stop in Helsingør and pay a toll to the Danish Crown. If a ship refused to stop, cannons in both Helsingør and Helsingborg could open fire and sink it. In 1567, the toll was changed into a 1–2% tax on the cargo value, providing three times more revenue. To keep the captains from understating the value of the cargo on which the tax was computed, the right to purchase the cargo at the stated value was reserved.