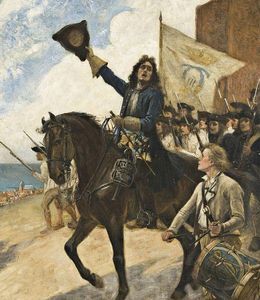 The Battle of Helsingborg was the last major engagement of the Great Northern War to take place on Swedish soil, and resulted in a decisive victory of a Swedish force of 14,000 men under the command of Magnus Stenbock against a Danish force of equal strength under the command of Jørgen Rantzau, ensuring that Denmarks final effort to regain the Scanian territories that it had lost to Sweden in 1658 failed. The battle was fought on March 10, 1710, in the province of Scania, just outside the city of Helsingborg, and directly on the Ringstorp heights just north-east of the city.
Denmark-Norway had been forced out of the Great Northern War by the Treaty of Traventhal in 1700, but had long planned on reopening hostilities with the goal of reconquering the lost provinces Scania, Halland and Blekinge. After the Swedish defeat at Poltava in 1709, the Danes saw an opportunity and declared war on Sweden the same year. The declaration of war arrived at the Swedish state council on October 18, 1709. The pretext given was that Sweden had been intentionally trying to avoid paying the Sound Dues, and that the population of Scania, Halland, Blekinge and Bohuslän had been mistreated by the Swedish.