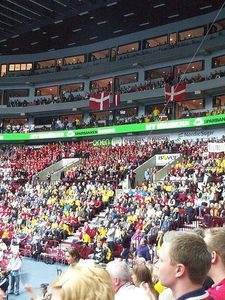 The 2011 World Men's Handball Championship, the 22nd event hosted by the International Handball Federation, was held in Sweden from 13–30 January, 2011. All matches were played in Malmö, Lund, Kristianstad, Gothenburg, Skövde, Jönköping, Linköping and Norrköping.

In the preliminary round, 24 teams from all the world's continents were split into 4 groups, with the first placed 3 teams advancing through the main round in two groups, carrying the previously won points against the remaining teams. France won the tournament after defeating Denmark in the final, while Spain won the bronze medal after defeating Sweden in the third-place match. Thus, France has qualified for the tournament at the London Olympics. The teams that finished in 2nd–7th place will play Olympic Qualifying Tournaments.