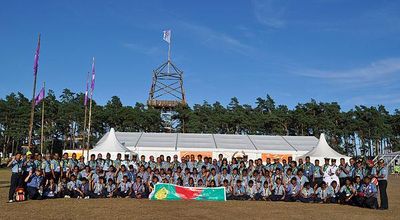 The 22nd World Scout Jamboree took place in Rinkaby, Kristianstad, Scania in southern Sweden from 27 July to 7 August 2011. The theme was Simply Scouting. 40,061 Scouts, leaders and adult volunteers participated from 166 different countries.
The Jamboree was held on the fields of Rinkaby. In 2001, a national Jamboree took place here with 26,700 participants, and another national Jamboree, Jiingijamborii was held here from 14–22 July 2007.
The camp area itself lies near the coast on sandy ground surrounded by pine woods. Sandy earth helps rain water run off and thus there is no risk of any parts of the camp area being waterlogged. The campsite is approximately 1.5 km by 1.5 km. Small areas of forest divide the campsite into smaller fields. The temperature is varying, average day temperature in the period is 22 degrees Celsius , average night temperature is 17 °C . The sun rises at 5 o'clock in the morning . Sunset is at 9 in the evening . Drinking water is available from wells at the field. There is already an extensive water and power system in the ground, dimensioned with the World Scout Jamboree in mind. In the southern part of the field there is space for the arena with a natural amphitheatre. There are sandy beaches near the camp area with sand dunes formed by the wind, creating their own particular type of landscape. The camp organised shuttle buses to the beach.