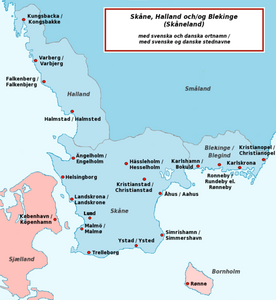 Skåneland or Skånelandene is a region on the southern Scandinavian peninsula. It includes the Swedish provinces of Blekinge, Halland and Scania. The Danish island of Bornholm is sometimes also included. Skåneland has no official recognition or function and the term is not in common usage. Equivalent terms in English and Latin are "the Scanian provinces" and "Terrae Scaniae" respectively. The term is mostly used in historical contexts and not in daily speech. In Danish, Skånelandene is used more often. The terms have no political implications as the region is not a geopolitical entity but a cultural region, without officially established political borders.

The provinces making up Skåneland were part of Denmark from at least the 9th century, sometimes referred to as the "Eastern Provinces"; since a 12th-century civil war, Denmark has been a kingdom with a single king. The provinces were part of the territory ceded to Sweden in 1658 under the Treaty of Roskilde, but after an uprising on Bornholm, that island was returned to Denmark in 1660, under the Treaty of Copenhagen.
The last peace treaty between Sweden and Denmark in which Skåneland was a main issue was signed on 3 July 1720 in Stockholm.