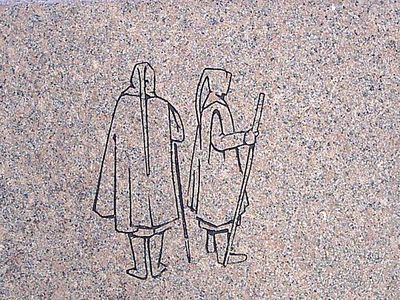 The Bocksten Man is the remains of a medieval man's body found in a bog in Varberg Municipality, Sweden. It is one of the best-preserved finds in Europe from that era and is exhibited at the Varberg County Museum. The man had been killed and impaled to the bottom of a lake which later became a bog. The bog where the body was found lies in Rolfstorp about 24 kilometres east of Varberg on the west coast of Sweden, close to the most important medieval road in the area: the Via Regia. He was recently reconstructed to show what he may have looked like when he was alive.
In the 1880s a farm called "Bocksten" was established near a bog. The bog was then regularly drained, and a harrow used to gather peat. Albert Johansson had previously found a leather shoe in the wetland and gave it to the Varberg museum. A shoe sole was found in the bog in summer of 1934, but the curator of the local museum, Albert Sandklef, did not recognize its importance.