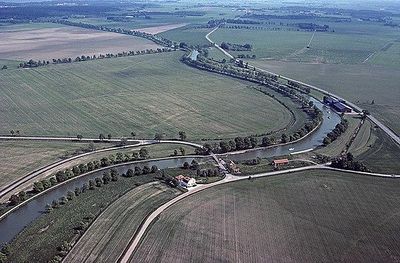 The Göta Canal is a Swedish canal constructed in the early 19th century.
The canal is 190 km long, of which 87 km were dug or blasted, with a width varying between 7–14 m and a maximum depth of about 3 m .
The Göta Canal is a part of a waterway 390 km long, linking a number of lakes and rivers to provide a route from Gothenburg on the west coast to Söderköping on the Baltic Sea via the Trollhätte kanal and Göta älv river, through the large lakes Vänern and Vättern.
This waterway was dubbed as Sweden's Blue Ribbon .
Contrary to the popular belief it is not correct to consider this waterway is as a sort of the greater Göta Canal: the Trollhätte Canal and the Göta Canal are completely separate entities.