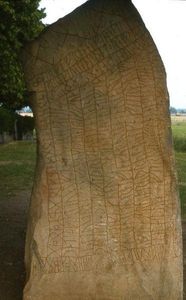 The Rök runestone is one of the most famous runestones, featuring the longest known runic inscription in stone. It can now be seen beside the church in Rök, Ödeshög Municipality, Östergötland, Sweden. It is considered the first piece of written Swedish literature and thus it marks the beginning of the history of Swedish literature.
The 5 long tons , 8 feet tall stone was discovered built into the wall of the church in the 19th century and removed from the church wall a few decades later. The church was built in the 12th century, and it was common to use rune stones as building material for churches. The stone was probably carved in the early 9th century, judging from the main runic alphabet used and the form of the language. It is covered with runes on five sides except the base which was to be put under ground. A few parts of the inscription are damaged, but most of it remains legible.