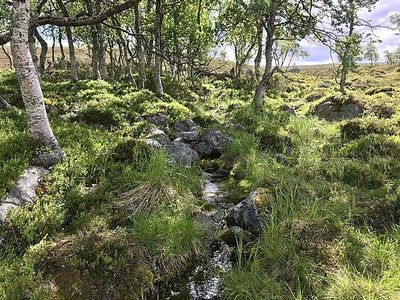 Klarälven is a river flowing through Norway and Sweden. Together with Göta älv, which it is called as the river has passed through the lake Vänern, thus regarded as an entity, Göta älv—Klarälven is the longest river in Scandinavia and in the Nordic countries and its Swedish part the longest river of Sweden. These two rivers also have the largest drainage basin in the same areas, 50,229 km2 including all the rivers that run into Vänern, of which 42,468 km2 is located in Sweden and 7,761 km2 in Norway.
It emanates at the northeast side of Mount Brändstöten and flows through a couple of smaller lakes down to Lake Rogen in Härjedalen, Sweden, and then passes through the Norwegian Hedmark, where it flows through the lake Femunden. There it is known as Femundelva and Trysilelva. The rest of the river, the longest part, flows through Värmland to ultimately discharge in a delta into Vänern at Karlstad.