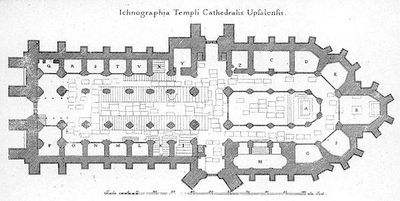 The cathedral dates to the late 13th century and at a height of 118.7 metres , it is the tallest church in the Nordic countries. Originally built under Roman Catholicism, it was used for coronations of Swedish monarchs for a lengthy period following the Protestant Reformation. Several of its chapels were converted to house the tombs of Swedish monarchs, including Gustav Vasa and John III. Carl Linnaeus, Olaus Rudbeck, Emanuel Swedenborg, and several archbishops are also buried here.