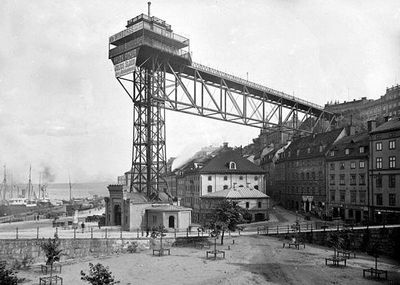 The Katarina Elevator or Katarina Lift is a passenger elevator in Stockholm that connects Slussen to the heights of Södermalm. The lift was a shortcut between Katarinavägen, Slussen and Mosebacke torg. The original lift was constructed in 1881, but the current structure dates from the rebuilding of the Slussen transport interchange in 1936. The lift has been closed since 2010 due to lack of security in the construction. There are plans to renovate the elevator's structure so that it can resume operation in 2019.

In 1881 the engineer Knut Lindmark, was permitted to build a lift and a bridge between Stadsgården and Mosebacke Torg , to make it easier for people to move between the different heights of Södermalm. The lift was opened March the 19th 1883. During the first month approximately 1,500 passengers rode the lift daily. The price was 5 öre for going up and 3 öre for going down on the lift at that time.