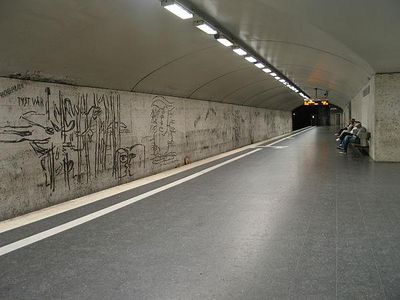 Östermalmstorg metro station is station on the red line of the Stockholm metro, located in the district of Östermalm. The station was opened on 16 May 1965 as the 59th station in the Stockholm system as the north terminus of the extension from T-Centralen. On 2 September 1967, the line was extended northeast to Ropsten. On 30 September 1973, another extension, north to Tekniska högskolan, was opened. The platform is approximately 38 metres below the surface. It is located in the city center, making it one of the most-used stations in the system, with approximately 37,900 people travelling from the station on an average workday.
The station was built by the cut-and-cover method and formed the first part of the extension of the red line north of T-Centralen. Nearby stations include Stadion and Karlaplan. Stockholm Central Station is about 1 kilometre away.