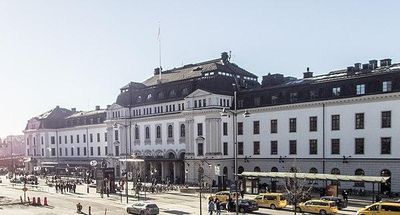 Stockholm Central Station is a railway station in Stockholm, Sweden. It is situated in the district of Norrmalm at Vasagatan/Central Plan. The station opened on 18 July 1871 and it had over 200,000 visitors daily, of which about 170,000 were travellers , until 10 July 2017 when the local commuter trains started to call at the nearby Stockholm City Station.

The station was built between 1867 and 1871 with Adolf W. Edelsvärd as the architect. Until 1925 the tracks led into the station but during a renovation 1925-1927 the tracks were moved to the west and the former track hall was converted into a 119 meter long, 28 meter wide and 13 meter high waiting hall. During the renovation the station was extended to the south through the construction of the southern pavilion. This part of the station currently houses a conference facility. Next to the conference facility is the Royal waiting hall where the Royal Family waits when travelling by train.