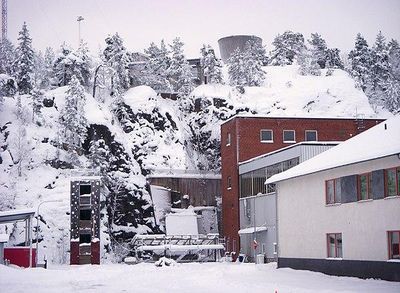 The nuclear power station Ågesta was the first Swedish commercial nuclear power plant. Also known as R3, it was the third nuclear reactor built in Sweden. Construction started in 1957 and ended in 1962, operations began in 1964 and continued until 1974.

The station was built underground, used heavy water moderation and was fueled with natural uranium. The station primarily provided district heating for the Stockholm suburb Farsta, as well as a small amount of electricity, 12 MW. It is widely assumed that the underground reactors had military purposes, being able to produce plutonium. The cost of construction was estimated at SEK 50 million but the final cost was SEK 230 million.