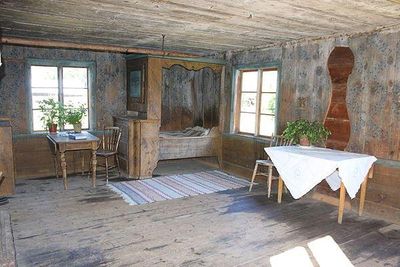 Bommars is a Swedish farm located in Letsbo, in the Ljusdal Municipality of Hälsingland. It is one of seven Decorated Farmhouses of Hälsingland which have been listed as UNESCO World Heritage Sites since 2012. At the national level, it has also been classified as a Listed buildings in Sweden since 2008.
The farm appeared for the first time in an inventory of the year 1542 under the name of Oppigården, owned by the peasant Påvel Olof Rolfsson, but the buildings acquired their present form in the nineteenth century. The two residential buildings, Sommarstugan and Vinterstugan , were built in 1848 for Sven Johansson and his wife Gölin Jonsdotter, who inherited his father's farm. However, the couple preferred to live in the Sven farm in Sörkämsta. It was not until 1887 that the farm became permanently inhabited by the couple's grandson, Sven Persson. It acquired its current name in the 1930s, when it became the property of the brothers Enno and Lars Johansson and was nicknamed "Bommapojkarna". It continues to be a private property.