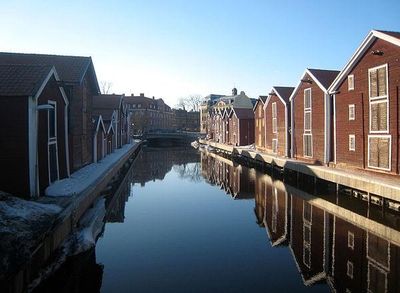 Hudiksvall is a city and the seat of Hudiksvall Municipality, in Hälsingland, Gävleborg County, Sweden with 15,015 inhabitants in 2010. Hudiksvall is also known as Glada Hudik , a term that originated in the 19th century as word spread of its friendly hospitality and its lively social life. The city is located along the E4, on the east coast of Sweden deep inside the bay Hudiksvallsfjärden, about 80 km south of Sundsvall and about 130 km north of Gävle. Hudiksvall is Sweden's 76th largest urban area and also the largest urban area in Hälsingland. Around Hudiksvall lies the communities of Delsbo, Iggesund, Enånger, Forsa and Näsviken.

Hudiksvall was founded by King John III of Sweden in 1582. He had the inhabitants moved from the town Hudik, where his father Gustav Vasa had collected the trade- and craftsmen of Hälsingland in order to more easily collect taxes, to Hudiksvall by the shores of the bay.