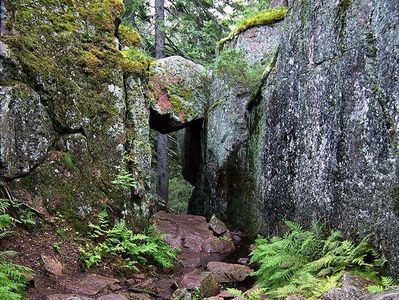 Skuleskogen National Park is a Swedish national park in Västernorrland County, on the coast of the Baltic Sea, in northern Sweden. It covers 30.62 kilometres , constituting the eastern part of the Forest of Skule.

The park is characterized by a very rough topology with many rocky peaks, of which the highest is Slåttdalsberget, 280 metres in altitude, rising directly from the sea. The topography is also marked by the presence of deep crevasses and caves. This particular topology can be found throughout the entire High Coast , a region of Sweden so named because it constitutes the highest section of the coast of the Baltic Sea. This region is in our day principally known as a favored site for the observation of the phenomenon of post-glacial rebound. Most of the region was under the sea less than 10,000 years ago, after the ice sheet that blanketed it melted. But thanks to the melting of this mass of ice that had been pressing down upon it, the ground is rising year by year, at a current speed of 8 mm per year.