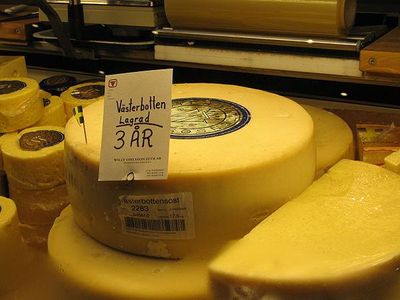 Västerbotten cheese , Swedish: Västerbottensost) is a cheese from the Västerbotten region of Sweden. It is a hard cow's milk cheese with tiny eyes or holes and a firm and granular texture. As in Cheddar cheese, the curd is heated, cut, and stirred before the cheese is moulded and aged. Strong in flavour, its taste is described as somewhat like Parmesan cheese, salty, but with more bitter notes. It is light yellow in colour and has a fat content of 31%. Many Swedish people consider it the king of cheese and demand for it has often outstripped the limited supply. For this reason, it is roughly twice as expensive as other types of aged cheese. Västerbotten cheese must be aged for at least 12 months, but 14 months is more common.

The village of Burträsk claims Västerbotten cheese was invented there in the 1870s, supposedly by a dairy maid, Eleonora Lindström. According to legend, she was left alone to stir the curd of a traditional cheese but was interrupted, either by other chores or an assignation with her lover. This resulted in alternating periods of heating and stirring of the curdling milk.