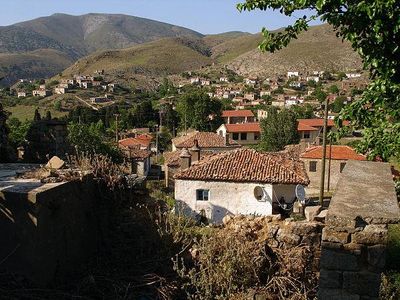 Imbros or İmroz, officially Gökçeada since 29 July 1970, is the largest island of Turkey and the seat of Gökçeada District of Çanakkale Province. It is located in the north-northeastern Aegean Sea, at the entrance of Saros Bay, and is the westernmost point of Turkey . Imbros has an area of 279 km2 and has some wooded areas.
According to the 2016 census, the island-district of Gökçeada has a population of 8,776. The main industries of Imbros are fishing and tourism. Today the island is predominantly inhabited by settlers from the Turkish mainland that mostly arrived there after 1960, but from the indigenous population about 300 Greeks are still remaining, most of them elderly, but including some families with children. The island was primarily inhabited by ethnic Greeks from antiquity until approximately the 1960s, when many emigrated to Greece, western Europe, the United States and Australia, due to a campaign of state-sponsored discrimination. The Greek Imbriot diaspora is thought to number around 15,000.