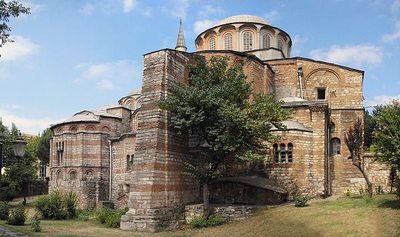 The Kariye Mosque , or the Church of the Holy Saviour in Chora , is a medieval Greek Orthodox church used as a mosque today in the Edirnekapı neighborhood of Istanbul, Turkey. The neighborhood is situated in the western part of the municipality of the Fatih district. The Church of the Holy Saviour in Chora was built in the style of Byzantine architecture. In the 16th century, during the Ottoman era, the Christian church was converted into a mosque; it became a museum in 1945, but was turned back into a mosque in 2020 The interior of the building is covered with some of the oldest and finest surviving Byzantine Christian mosaics and frescoes; they were uncovered and restored after the building was secularized and turned into a museum.

The original, 4th-century monastery containing the church, was outside Constantinople's city walls. Literally translated, the church's full name was the Church of the Holy Saviour in the Country . It is therefore sometimes incorrectly referred to as "Saint Saviour". However, "The Church of the Holy Redeemer in the Fields" would be a more natural rendering of the name in English. The last part of the Greek name, Chora, referring to its location originally outside of the walls, became the shortened name of the church. The name must have carried symbolic meaning, as the mosaics in the narthex describe Christ as the Land of the Living and Mary, the Mother of Jesus, as the Container of the Uncontainable .