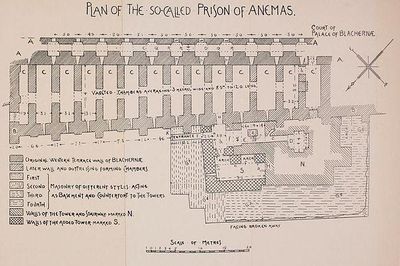 The Prison of Anemas is a large Byzantine building attached to the walls of the city of Constantinople . It is traditionally identified with the prisons named after Michael Anemas, a Byzantine general who rose in unsuccessful revolt against Emperor Alexios I Komnenos and was the first person to be imprisoned there. The prison features prominently in the last centuries of the Byzantine Empire, when four Byzantine emperors were imprisoned there.

The building is located in the suburb of Blachernae, between the mid-12th century stretch of walls constructed by the Emperor Manuel I Komnenos and the earlier walls of Byzantine emperors Heraclius and Leo V the Armenian . A small stretch of wall connects the structure to the east with the wall of Manuel Komnenos. The structure's outer wall itself is extraordinarily high, rising as high as 23 m above the ground in front of it, and is 11–20 m thick. Behind the outer curtain wall, the building consists of twelve three-storied chambers. Its outer face features two rectangular towers built side-by-side, with one shared wall. The twin towers are in turn supported by a massive buttress, which stands almost 8 m above the ground level and projects from 6.5–9 m in front of the towers themselves.