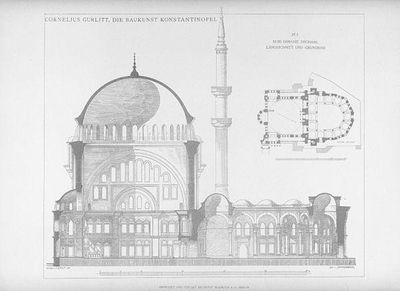 The Nuruosmaniye Mosque is an 18th-century Ottoman mosque located in the Çemberlitaş neighbourhood of Fatih district in Istanbul, Turkey. In 2016 it was inscribed in the Tentative list of World Heritage Sites in Turkey. The dome of the mosque is extremely distinct, and the fourth largest in the city of Istanbul, behind the Hagia Sophia, Süleymaniye Mosque, and Fatih Mosque, respectively. The Nuruosmaniye mosque is part of a larger religious complex, or Külliye, acting as a centre of culture, religion, and education for the neighborhood. The first imperial mosque of Istanbul that integrated both Baroque and neoclassical elements in its construction, Nuruosmaniye Mosque was built in the Ottoman Baroque style.

The mosque's muqarnas and its curved courtyard show the influence of the Baroque. The mosque is located on Istanbul's second hill, site of the mosque of Fatma Huton; that mosque was burned due to a fire. In Constantinople, the area of the Nurosmaniye Mosque was close to the Forum of Constantine, where the Column of Constantine still stands. Surrounding the mosque is Istanbul's Grand Bazaar . After the construction of the Sultan Ahmed Mosque, the Nurosmaniye mosque was the first imperial mosque to be built in 100 years.