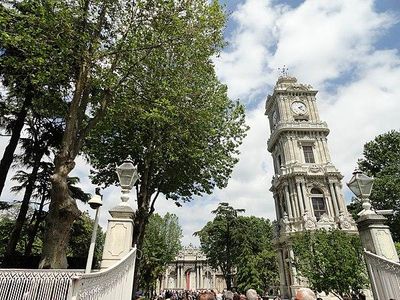 Dolmabahçe Clock Tower is a clock tower situated outside Dolmabahçe Palace in Istanbul, Turkey. Its construction was ordered by Ottoman sultan Abdülhamid II and designed by the court architect Sarkis Balyan between 1890 and 1895.

The clock tower was added to Dolmabahçe Palace, and stands in front of its Treasury Gate on a square along the European waterfront of Bosphorus next to Dolmabahçe Mosque. Designed in Ottoman neo-baroque style, the four-sided, four-story tower stands on a floor area of 8.5 × 8.5 m at a height of 27 m . Its clock was manufactured by the renowned French clockmaker house of Jean-Paul Garnier, and installed by the court clock master Johann Mayer. Its face features highly stylised Eastern Arabic numerals. In 1979, the original mechanical clock was converted partly to an electrical one. Two opposing sides of the tower bear the tughra of Sultan Abdul Hamid II.