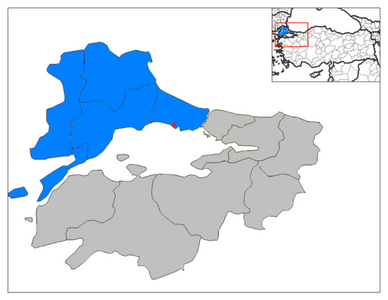 East Thrace or Eastern Thrace , also known as Turkish Thrace or European Turkey, is the part of Turkey that is geographically a part of Southeast Europe. It accounts for 3% of Turkey's land area but comprises 14% of its total population. The rest of the country is located on the Anatolian Peninsula as well as the Armenian Highlands, geographically in Western Asia. The largest city of the region is Istanbul, which straddles the Bosporus between Europe and Asia.

East Thrace is of historic importance as it is next to a major sea trade corridor and constitutes what remains of the once-vast Ottoman region of Rumelia. It is currently also of specific geostrategic importance because the sea corridor, which includes two narrow straits, provides access to the Mediterranean Sea from the Black Sea for the navies of five countries: Russia, Ukraine, Romania, Bulgaria, and Georgia. The region also serves as a future connector of existing Turkish, Bulgarian, and Greek high-speed rail networks.