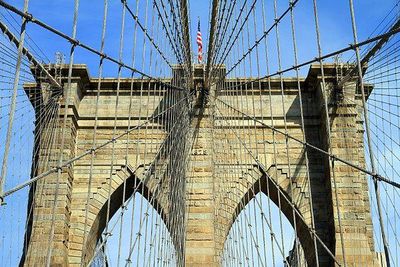 Proposals for a bridge connecting Manhattan and Brooklyn were first made in the early 19th century, which eventually led to the construction of the current span, designed by John A. Roebling. The project's chief engineer, his son Washington Roebling, contributed further design work, assisted by the latter's wife, Emily Warren Roebling. Construction started in 1870, with the Tammany Hall-controlled New York Bridge Company overseeing construction, although numerous controversies and the novelty of the design prolonged the project over thirteen years. Since opening, the Brooklyn Bridge has undergone several reconfigurations, having carried horse-drawn vehicles and elevated railway lines until 1950. To alleviate increasing traffic flows, additional bridges and tunnels were built across the East River. Following gradual deterioration, the Brooklyn Bridge has been renovated several times, including in the 1950s, 1980s, and 2010s.