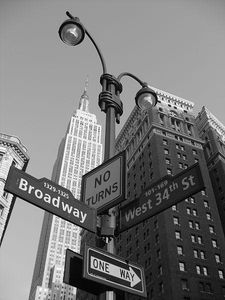 The Empire State Building is a 102-story Art Deco skyscraper in Midtown Manhattan, New York City. It was designed by Shreve, Lamb & Harmon and completed in 1931. The building has a roof height of 1,250 feet and stands a total of 1,454 feet tall, including its antenna. Its name is derived from "Empire State", the nickname of New York. The Empire State Building stood as the world's tallest building for nearly 40 years until the construction of the World Trade Center's North Tower in Lower Manhattan in late 1970. Following the September 11 attacks in 2001, it was again the tallest building in New York City until it was surpassed by the new One World Trade Center in 2012. As of 2019, the building is the seventh-tallest building in New York City, the sixth-tallest completed skyscraper in the United States, and the 45th-tallest in the world. It is also the sixth-tallest freestanding structure in the Americas.

The site of the Empire State Building, located in Midtown South on the west side of Fifth Avenue between West 33rd and 34th Streets, was originally part of an early 18th-century farm, then became the site of the Waldorf–Astoria Hotel in 1893. In 1929, Empire State Inc. acquired the site and devised plans for a skyscraper there. The design for the Empire State Building was changed fifteen times until it was ensured to be the world's tallest building. Construction started on March 17, 1930, and the building opened thirteen and a half months afterward on May 1, 1931. Despite the publicity surrounding the building's construction, its owners failed to make a profit until the early 1950s.