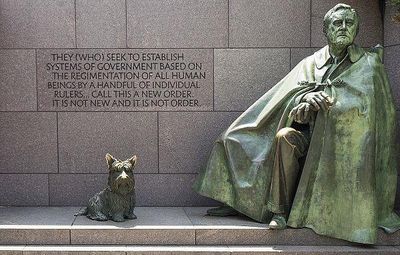 Dedicated on May 2, 1997 by President Bill Clinton, the monument, spread over 7.5 acres adjacent to the southwest side of the Tidal Basin along the Cherry Tree Walk in West Potomac Park, traces 12 years of the history of the United States through a sequence of four outdoor rooms, one for each of FDR's terms of office. Sculptures inspired by photographs depict the 32nd president alongside his dog Fala.