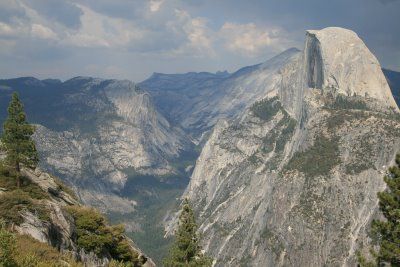 Half-Dome in Yosemite National Park is a massive, glorious bornhardt. Bornhardt are large, circular domes formed by spherical sheets shedding off uplifted rock. They could be formed by long-distance scarp retreat in a series of piecemeal landslides, or a multi-stage process of weathering and stripping of loose rocks. Since they shed rocks in sheets, another question is if the weakened joints form by the rock expanding after unloading overlaying material, or is it the exact opposite and the joints formed under compression from being squeezed while buried?