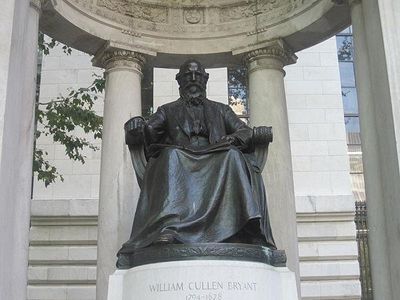 Bryant Park is a 9.6-acre public park located in the New York City borough of Manhattan. Privately managed, it is located between Fifth Avenue and Avenue of the Americas and between 40th and 42nd Streets in Midtown Manhattan. The eastern half of Bryant Park is occupied by the Main Branch of the New York Public Library . The western half, which contains a lawn, shaded walkways, and amenities such as a carousel, is located entirely over an underground structure that houses the library's stacks. The park hosts several events, including a seasonal "Winter Village" with an ice rink and shops during the winter.

The first park at the site was opened in 1847 and was called Reservoir Square due to its proximity to the Croton Distributing Reservoir. Reservoir Square contained the New York Crystal Palace, which hosted the Exhibition of the Industry of All Nations in 1853 and burned down in 1858. The square was renamed in 1884 for journalist William Cullen Bryant. The reservoir was demolished in 1900 and the NYPL's Main Branch was built on the site, opening in 1911. Bryant Park was rebuilt in 1933–1934 to a plan by Lusby Simpson. After a period of decline, it was restored in 1988–1992 by architecture firms Hanna/Olin Ltd. and Hardy Holzman Pfeiffer Associates, during which the park was rebuilt and the NYPL's stacks were built underneath. Further improvements were made in the late 20th and early 21st centuries.