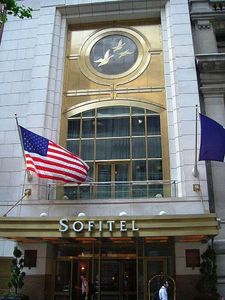 Sofitel New York is a boutique hotel on West 44th Street in Midtown Manhattan in New York City, owned and managed by the Sofitel corporation. It lies about 200 metres north of Bryant Park and New York Public Library and next to the New York Yacht Club. The hotel is inspired by French traditions in furnishings and theme, and the hotel staff are bilingual in French and English. Completed in 2000, the 109-metre-tall , 30-floor, 398-guest room limestone and glass building was awarded the 2000 Emporis Skyscraper Award.

Construction on the hotel began in 1997, and it opened in the year 2000. The International Monetary Fund was reportedly responsible for funding the project after a design by Brennan Beer Gorman was chosen in an architectural competition which included entries from architects such as Michael Graves & Associates. After construction the building was awarded the 2000 Emporis Skyscraper Award.