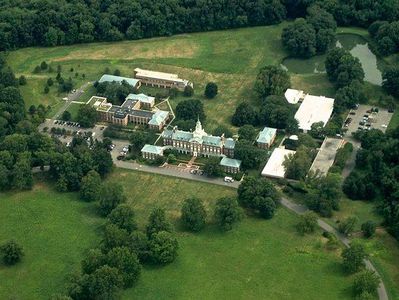 The Institute for Advanced Study , located at 1 Einstein Drive, Princeton, New Jersey, in the United States, is an independent postdoctoral research center for theoretical research and intellectual inquiry. It is perhaps best known as the academic home of Albert Einstein, J. Robert Oppenheimer, Hermann Weyl, John von Neumann and Kurt Gödel, after their immigration to the United States. It was founded in 1930 by American educator Abraham Flexner, together with philanthropists Louis Bamberger and Caroline Bamberger Fuld. Although it is close to and collaborates with Princeton University, Rutgers University, and other nearby institutions, it is independent and does not charge tuition or fees.
Flexner's guiding principle in founding the Institute was the pursuit of knowledge for its own sake. The faculty have no classes to teach. There are no degree programs or experimental facilities at the Institute. Research is never contracted or directed. It is left to each individual researcher to pursue their own goals. Established during the rise of European fascism, the IAS played a key role in the transfer of intellectual capital from Europe to America and soon acquired a reputation at the pinnacle of academic and scientific life — a reputation it has retained.