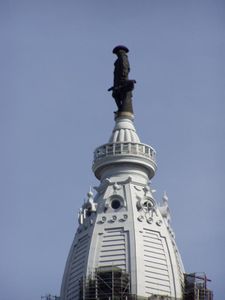 On top of Philadelphia City Hall stands a statue of William Penn, overlooking his area: he called it Pennsylvania. Penn was an Englishman, the son of Admiral Sir William Penn and Margaret Jasper, daughter of a Rotterdam merchant. As a Quaker he wanted to settle in his Philadelphia but because of financial difficulties, he returned to England. He conducted many court cases to his rights and even tried to sell Pennsylvania back to the English crown, but during discussions in 1712 he suffered a stroke that made speech and independent functioning impossible. He died in 1718.