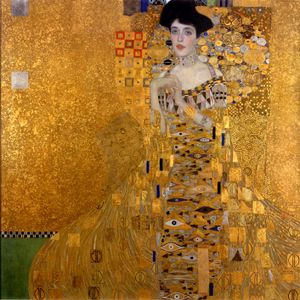 The Neue Galerie is linked to the movie "Woman in Gold". That's a 2015 British-American drama film based on the true story of Maria Altmann. Maria Altmann is an Austrian Jewish refugee who had to flee the country in Austria just before World War II to the United States for the Nazi regime in her country. During this event, five paintings were stolen from her childhood home owned by her family, including the portrait of her aunt, Adèle Bloch-Bauer. The title of the film, Woman in Gold, is derived from this painting. Later, the works of art came into the hands of the Austrian government and the works could be seen in the Österreichische Galerie Belvedere museum in Vienna, among others. Altmann started a legal battle to restore the works of art to family ownership. She was assisted by the young lawyer Randol Schoenberg, grandson of the also Austrian Jew Arnold Schönberg. This long drawn-out process took almost a decade. One of the five works of art was the painting 'Portrait of Adèle Bloch-Bauer I' by the Viennese painter Gustav Klimt. The painting was auctioned for $ 135 million later in 2006, and was purchased by Ronald Lauder for the Neue Galerie museum in New York. This also puts the painting in the top 10 of the list of most expensive paintings of all time. Altmann, incidentally, was not about the market value of the portrait of her beloved aunt Adèle when she started a lawsuit. The intention was only for justice and the memories of her aunt.