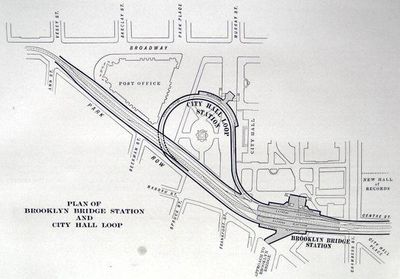 City Hall, also known as City Hall Loop, was the original southern terminal station of the first line of the New York City Subway, built by the Interborough Rapid Transit Company , named the "Manhattan Main Line", and now part of the IRT Lexington Avenue Line. Opened on October 27, 1904, this station, located underneath the public area in front of City Hall, was designed to be the showpiece of the new subway. The platform and mezzanine feature Guastavino tile, skylights, colored glass tilework, and brass chandeliers. The Rafael Guastavino-designed station is unique in the system for the usage of Romanesque Revival architecture.

The station was built on a curve and could only accommodate five-car trains of 257 feet , which proved to be inefficient as subway ridership grew and trains were lengthened to 10 cars. Due to the infrastructural shortfalls, as well as its proximity to the nearby Brooklyn Bridge station, passenger service was discontinued on December 31, 1945, although the station is still used as a turning loop for the 6 and <6>​ trains.