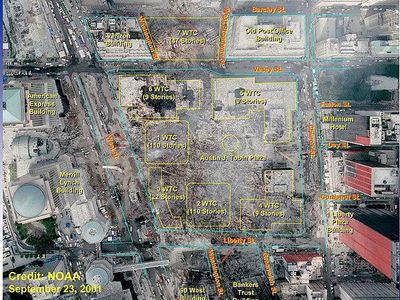 5 World Trade Center is a planned skyscraper at the World Trade Center in Lower Manhattan, New York City. The site is across Liberty Street, to the south of the main 16-acre World Trade Center site. As of June 2018, the project is on standby while the Port Authority explores a potential sale of the lot to a developer and looks for tenants to occupy the skyscraper. The proposed building shares its name with the original 5 World Trade Center, which was heavily damaged as a result of the collapse of the North Tower during the September 11 attacks and was later demolished. The Port Authority has no plans to construct a building at 130 Liberty Street, although it is open to future development of the site as office, retail, hotel, residential or some mix of those uses.
In June 2007, JPMorgan Chase announced plans to develop the building as the headquarters of its J.P. Morgan Investment Bank. However, JPMorgan Chase's acquisition of Bear Stearns in March 2008 put those plans in doubt, given the company will relocate J.P. Morgan to 383 Madison Avenue.