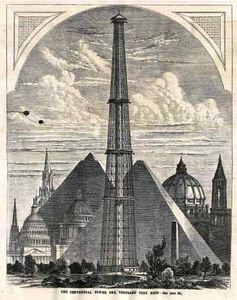 The Centennial International Exhibition of 1876, the first official World's Fair to be held in the United States, was held in Philadelphia, Pennsylvania, from May 10 to November 10, 1876, to celebrate the 100th anniversary of the signing of the Declaration of Independence in Philadelphia. Officially named the International Exhibition of Arts, Manufactures, and Products of the Soil and Mine, it was held in Fairmount Park along the Schuylkill River on fairgrounds designed by Herman J. Schwarzmann. Nearly 10 million visitors attended the exposition, and 37 countries participated in it.

The Great Central Fair on Logan Square in Philadelphia, Pennsylvania, in 1864 , was one of the many sanitary fairs held during the Civil War. They provided a creative and communal means for ordinary citizens to promote the welfare of Union soldiers and dedicate themselves to the survival of the nation, and the Great Central Fair bolstered Philadelphia's role as a vital center in the Union war effort. It anticipated the combination of public, private, and commercial investments that were necessary to mount the Centennial Exposition. Both had a similar neo-Gothic appearance, the waving flags, the huge central hall, the "curiosities" and relics, handmade and industrial exhibits, and also a visit from the president and his family.