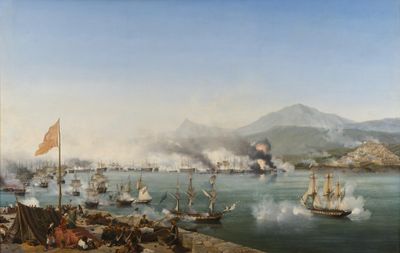 You wonder if there is a link between the London stock exchange and this beautiful bay of Navarino. In the great book 'Sapiens, A brief History of Humankind', author Yuval Noah Harari describes why the English got involved in the Battle of Navarino:

"In 1821 the Greeks rebelled against the Ottoman Empire. The uprising aroused great sympathy in liberal and romantic circles in Britain - Lord Byron, the poet, even went to Greece to fight alongside the insurgents. But London financiers saw an opportunity as well. They proposed to the rebel leaders the issue of tradable Greek Rebellion Bonds on the London stok exchange. The Greeks would promise to repay the bonds, plus intererst, if and when they won their independence. Private investors bought bonds to make a profit, or out of sympathy for the Greek cause, or both.... ... (But) the Turks gradually gained the upper hand. With a rebel defeat imminent, the bondholders faced the prospect of losing their trousers. The bondholders' interest was the national interest, so the British organized an international fleet that, in 1827, sank the main Ottoman flotilla in the Battle of Navarino. After centuries of subjugation, Greece was finally free. But freedom came with a huge debt that the new country had no way of repaying. The Greek economy was mortgaged to British creditors for decades to come."