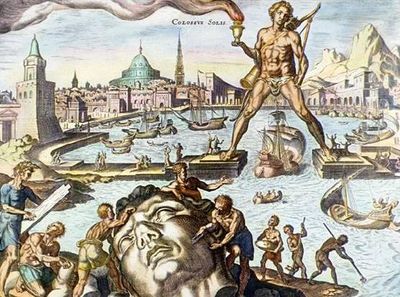 The Colossus of Rhodes was a statue of the Greek sun-god Helios, erected in the city of Rhodes, on the Greek island of the same name, by Chares of Lindos in 280 BC. One of the Seven Wonders of the Ancient World, it was constructed to celebrate Rhodes' victory over the ruler of Cyprus, Antigonus I Monophthalmus, whose son Demetrius I of Macedon unsuccessfully besieged Rhodes in 305 BC. According to most contemporary descriptions, the Colossus stood approximately 70 cubits, or 33 metres high—the approximate height of the modern Statue of Liberty from feet to crown—making it the tallest statue of the ancient world. It collapsed during the earthquake of 226 BC; although parts of it were preserved, it was never rebuilt.

As of 2015, there are tentative plans to build a new Colossus at Rhodes Harbour, although the actual location of the original remains in dispute.