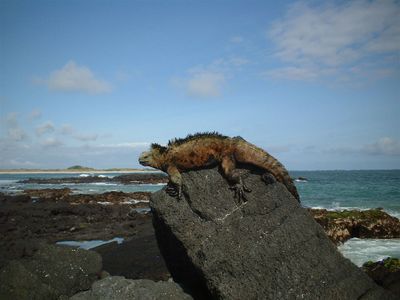 Charles Darwin & Captain Robert FitzRoy vistied the Galapagos islands during the 2nd Voyage of the Beagle. They arrived on September 15, 1835. They left on October 20. The islands were very interesting for Charles because they were geologically new and quite far away from land, so he could study the effect of evolution in isolation.

Darwin noticed that mockingbirds differed between islands, though he thought the birds now known as Darwin''s finches were unrelated to each other. When specimens of birds were analysed on his return it was found that many apparently different kinds of birds were species of finches which were also unique to islands. These facts were crucial in Darwin''s development of his theory of natural selection explaining evolution, which was presented in The Origin of Species.

Darwin wrote later in his notes that to his astonishment he found that all the mockingbirds caught on different islands of the Galapagos (Charles, Albemarle, James and Chatham Islands) differed from island to island.