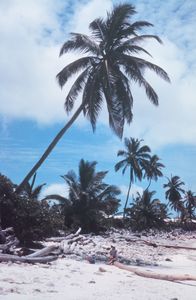 The Territory of Cocos (Keeling) Islands, also called Cocos Islands and Keeling Islands, are part of Austrialia. As a task during the Voyage of the Beagle, the Admirality required a detailed study of coral atolls and how coral reefs were formed. To study this, Captain Robert FitzRoy selected these islands for the survey. They arived here on April 1, 1835. Charles Darwin examined the atoll''s structure in view of the theory he had developed in Lima, of encircling reefs becoming atolls as an island sank. This idea was supported by the numerous soundings FitzRoy had taken showing a steep slope outside the reef.