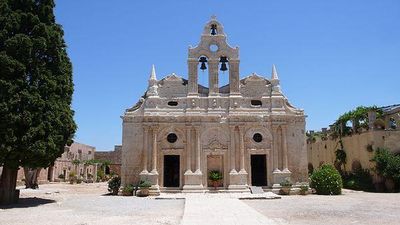 The Arkadi Monastery is an Eastern Orthodox monastery, situated on a fertile plateau 23 km to the southeast of Rethymnon on the island of Crete in Greece.

The current catholicon dates back to the 16th century and is marked by the influence of the Renaissance. This influence is visible in the architecture, which mixes both Roman and baroque elements. As early as the 16th century, the monastery was a place for science and art and had a school and a rich library. Situated on a plateau, the monastery is well fortified, being surrounded by a thick and high wall.