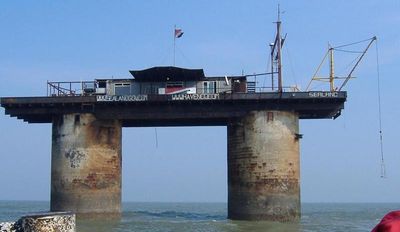 In 1943, during World War II, HM Fort Roughs was constructed by the United Kingdom as one of the Maunsell Forts, primarily for defence against German mine-laying aircraft that might be targeting the estuaries that were part of vital shipping lanes. It comprised a floating pontoon base with a superstructure of two hollow towers joined by a deck upon which other structures could be added. The fort was towed to a position above the Rough Sands sandbar, where its base was deliberately flooded to allow it to sink to its final resting place on the sandbar. The location chosen was approximately six miles from the coast of Suffolk, outside the then three-mile territorial water claim of the United Kingdom and therefore in international waters.