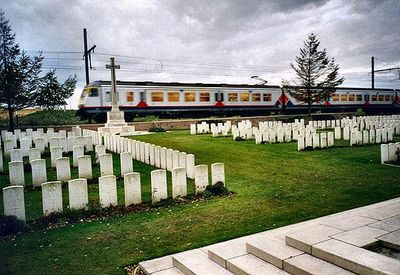 This cemetery was constructed to the north of a small group of larch trees, which stood on the north-eastern side of the railway line. A number of galleries and shelters were dug in the wood, which were used in 1917 as headquarters for reserve battalions.
The cemetery was opened in April 1915 and was used by units operating in the sector – in particular, the 46th (North Midland) Division and the 1st Dorsets – until April 1918. During the frequent fighting at Hill 60, Larch Wood was a real ‘front-line’ cemetery.
The cemetery was enlarged after the war by the concentration of isolated burials from the battlefields around Ypres and from German military cemeteries in Belgium.
856 Commonwealth war dead and 1 other nationality are now buried or commemorated here. About 40% of the burials are unidentified.