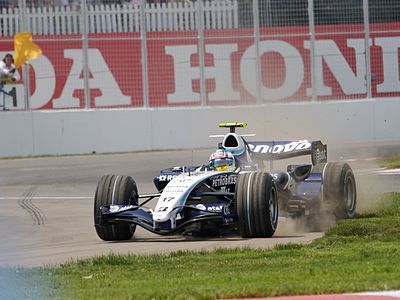 The 2007 Canadian Grand Prix was a Formula One motor race held on 10 June 2007 at Circuit Gilles Villeneuve in Montreal, Quebec, Canada. It was the sixth race of the 2007 Formula One season. The race was won by Lewis Hamilton, starting from pole position, in his first season in the top formula. It was Hamilton's first win in Formula One and the first Formula One race won by a black driver. Nick Heidfeld finished second and Alexander Wurz was third, making it the first Grand Prix of the 2007 season that drivers from teams other than Ferrari and McLaren achieved podium positions.
The safety car was deployed an unprecedented four times during the course of the race. One of these periods was due to Robert Kubica's crash, which resulted in him suffering a sprained ankle and concussion. During the race Felipe Massa and Giancarlo Fisichella were disqualified for failing to stop at the end of the pit lane when the exit was closed.