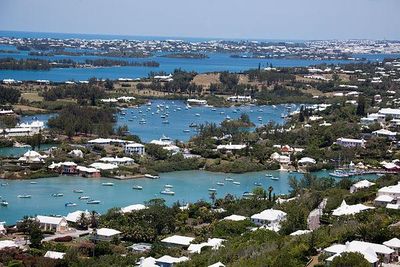 Bermuda () is a British Overseas Territory in the North Atlantic Ocean. It is approximately 1,035.26 km east-southeast of Cape Hatteras, North Carolina ; 1,236 km south of Cape Sable Island, Nova Scotia; 1,759 km northeast of Cuba, and 1,538 km due north of the British Virgin Islands. Though it is typically referred to in the singular, Bermuda consists of 181 islands; the largest of these islands is known as Main Island. The capital city of Bermuda is Hamilton. Bermuda is internally self-governing, with its own constitution and cabinet of ministers selected from the elected Members of the lower house of a Parliament that enacts local laws. As the national government, the Government of the United Kingdom is ultimately responsible for ensuring good governance within British Overseas Territories, and retains responsibility for defence and foreign relations. As of July 2018, it has a population of 71,176, making it the most populous of the British overseas territories. Bermuda's largest economic sectors are offshore insurance, reinsurance, and tourism. Bermuda had one of the world's highest GDP per capita for most of the 20th century.
Bermuda's climate is usually described as subtropical, primarily due to the chilly but generally mild winter temperatures. Unlike other areas designated as subtropical, summers are also quite mild, with temperatures not rising in most years above 86° F during the hottest months of July and August. Its climate also exhibits oceanic features similar to other oceanic islands and the western coasts of continents in the Northern Hemisphere: mean wind direction is from the west and carries warm, moist air from the ocean, ensuring relatively high humidity and stabilising temperature. Bermuda lies in Hurricane Alley and is thus prone to severe weather; however, it receives some protection from a coral reef and its position at the north of the belt, which limits the direction and severity of approaching storms.