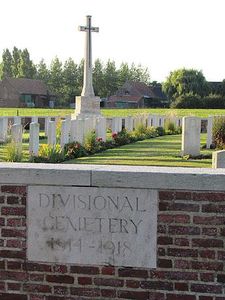 Near to this spot stood Rossières Chateau, a manor house that was used by different divisions as their headquarters – hence the name of the cemetery. Nevertheless, the chateau was hardly damaged during the war – reputedly because the German general von Bissing had stayed there during the brief occupation of Ypres in October 1914 and had taken a fancy to the place! It was finally destroyed in 1920, when a nearby munitions dump blew up.
There was already a cemetery at this site in 1914. A number of Belgian soldiers were buried here, but the graves were later removed. It was first used regularly at the end of April 1915, following the first gas attacks, and continued in use until May 1916.
In row C you can find the collective graves of 23 men from the 2nd Duke of Wellington’s (West Riding) Regiment, who died during the German gas attack at Hill 60 on 5 May 1915. Each headstone records three names, which is unusual. The cemetery was opened for use again in 1917 during the Third Battle of Ypres, and was significantly enlarged as a result.