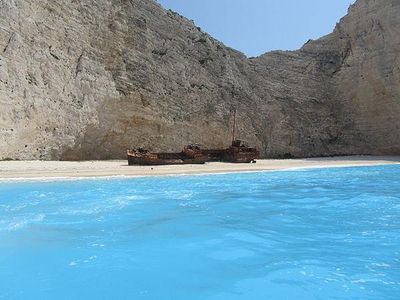 Navagio Beach , or Shipwreck Beach, is an exposed cove, sometimes referred to as "Smugglers Cove", on the coast of Zakynthos, in the Ionian Islands of Greece. Navagio Beach was originally known as Agios Georgios. On 2 October 1980, a freightliner, the MV Panagiotis, ran aground in the waters around Zakynthos Island on Navagio Beach during stormy weather and bad visibility. It has been rumored the ship was smuggling contraband such as cigarettes, wine and women. The ship was abandoned and still rests buried in the limestone gravel of the beach that now bears the nickname Shipwreck.
The location was prominently featured in the hit Korean drama Descendants of the Sun leading to a surge of interest among Chinese and Korean tourists.