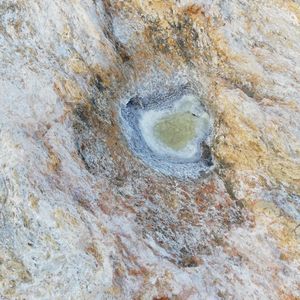 The creation of potholes are described as depressions which are abraded and scoured by water and grinding tools under the influence of currents that produce a vortex motion. Elston (1918) referred to holes developed in this manner as "normal potholes," and Alexander (1932) used also the term "eddy holes" to describe depressions formed by this mechanism.

I still have my doubts that these potholes here are caused by 'grinding tools'. If this was the case, it is pretty strange that I couldn't find any grinding material in any of these potholes. And there are quite a few here. Even if you argue that they are all have finished their grinding stage, and as such all the grinding material is just finished (dissolved), the alternative of chemical weathering makes more sense to me. Another argument is that in these cases, the potholes are not even close to circular what I would expect if there was grinding due to a vortex kind of motion. A simple test would be to measure their size over time, now there is no grinding activity anymore, and check frequently it doesn't contain any grinding material. If these potholes still get larger, than it can't be caused by the classic described mechanism of grinding.

I assume that a combination of brine and heat on this type of rock can have quite a severe impact and does the works. Or maybe that impression comes from too much suffering in the sun during my holiday. Please add your thoughts to undermine or support the hypothesis.