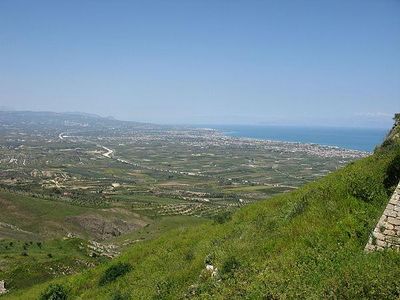 The Gulf of Corinth or the Corinthian Gulf is a deep inlet of the Ionian Sea, separating the Peloponnese from western mainland Greece. It is bounded in the east by the Isthmus of Corinth which includes the shipping-designed Corinth Canal and in the west by the Strait of Rion which widens into the shorter Gulf of Patras and of which the narrowest point is crossed since 2004 by the Rio–Antirrio bridge. The gulf is bordered by the large administrative divisions : Aetolia-Acarnania and Phocis in the north, Boeotia in the northeast, Attica in the east, Corinthia in the southeast and south and Achaea in the southwest. The gulf is in tectonic movement comparable to movement in parts of Iceland and Turkey, growing by 10 mm per year.

Shipping routes between the Greek commercial port Piraeus to western Mediterranean and hemisphere ports pass along this gulf. A further crossing in the form of ferry links Aigio and Agios Nikolaos, towards the western part of the gulf.