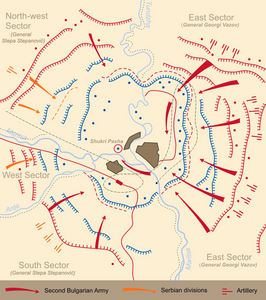 The Battle of Adrianople or Siege of Adrianople was fought during the First Balkan War, beginning in mid-November 1912 and ending on 26 March 1913 with the capture of Edirne by the Bulgarian 2nd Army and the Serbian 2nd Army.
The loss of Edirne delivered the final decisive blow on the Ottoman army and brought to a close the First Balkan War. A treaty was signed in London on 30 May. The city was re-occupied and kept by Turkey in the Second Balkan War.
The victorious end of the siege was considered an enormous military success because the defenses of city were carefully developed by leading German siege experts and were dubbed 'undefeatable'. The Bulgarian army, after 5 months of siege and two bold night attacks, took the Ottoman stronghold.